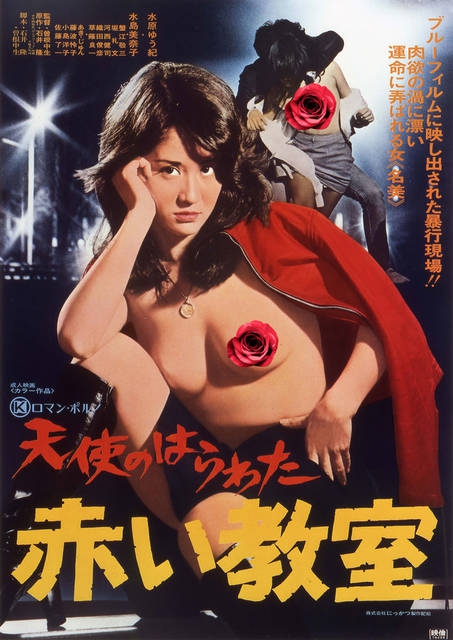 To Muraki, nude women are just an everyday affair, a hassle, a job. Behind every naked woman there stands a man with a camera and a business. While the pictures capture a women being pleasured or forced into uncompromising positions, it all stays within the frame of the camera. The people that take these pictures have set up a loving and caring environment to always make sure the women are comfortable in the otherwise very uncomfortable situations. But when Muraki finds a film where the pain seems so real, he takes it upon himself to find the truth behind it’s making…and also to save the actress on screen. What he finds is the underbelly to the porn industry where the women in the pictures is a mirror to their very own lives.

Love stories come in all different shapes and sizes. From the timeless tale of Romeo and Juliet to the more contemporary tale of Almasy and Katharine Clifton, there is one thing all great romances have in common: tragedy.

The Angel Guts series may be well known for their gritty and shocking content, but what makes them so revered is the latent commentary beneath all the rape and violence. Each installment has its own form of romance, but RED CLASSROOM really shines above the rest.

Chusei Stone showed us in HIGH SCHOOL CO-ED that he had panache, albeit a not fully developed one, but it was there. RED CLASSROOM really shows how much Chusei has evolved. First and foremost, there is a real since of atmosphere. Whereas in HIGH SCHOOL CO-ED, the budget was sorely visible, RED CLASSROOM does a great job in not only looking beautiful, but it subtly deploys some genius directorial techniques. From Muraki’s stroll through the neon-drenched streets of the red-light district to his first meeting with Nami, each frame is lyrical in its composition and execution.

I’m sure that many viewers’ interest is piqued by the sex depicted in RED CLASSROOM. Well, their cries are rewarded. The sex scenes are fairly numerous in numbers. Unlike the other women of the series, the ones in this film resemble 70’s starlets. Practically all of them are drop dead gorgeous, but to each man his own. The sex scenes themselves exist in a plane between softcore and hardcore. Because of the story, the viewer is also treated to quite of bit of pornographic S&M pictures in between the sex sessions. Basically, if you want to see some hot steamy sex, you got it. Word of warning though, some of them are true to the series and are very disturbing.

The story itself is dazzling. The script that compliments the story is equally superb. In fact, I was so absorbed in this film that I found the promiscuous sex scenes bothersome. I actually fast-forwarded through all the moaning and groaning just so the story could progress. I wanted to see what became of the relationship between Muraki and Nami. Part of this is due to the actors who really shine in all their B-movie glory. The core cast are surprisingly, very likable people, and at times, hilarious individuals. Although they deal in the shady business of pornography, they are just good people trying to make a living. In HIGH SCHOOL CO-ED, all the men were awful people regardless of how much sympathy they had. In RED CLASSROOM, most everyone respects and adores women, even when they work in an industry that exploits them. It isn’t until the very end that the typical Angel Guts male appears. Throughout the whole film, we only see a product of their crimes via Nami. When they finally appear in the flesh, the effect is unnerving. The audience wants so much for Nami to find peace and happiness and we want for Muraki to be the one that rescues her. RED CLASSROOM really succeeds in connecting with the audience. Whereas we watch the other Angle Guts films through the eyes of the underbelly of society, we see this film through the eyes of the ones that are affected by this dark society.

The second film in the series, the video is considerably better than the first film. In fact, it’s great! The audio again delivers. The extras are commentaries and interviews. Simply put, this is an amazing disc in the set.